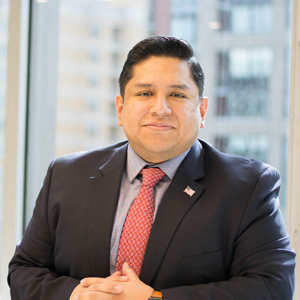 Christian Martinez is the Director of Rapid Response and War Room Operations. Prior to joining America Rising in January of 2018, he worked as a campaign manager for a Commonwealth Attorney race in Lynchburg and was part of the Republican Party of Virginia field program for the 2017 Virginia Governor’s race. More recently, he served as an America Rising war room media analyst.

When he’s not staying up alerting and plugged into the ever-changing news cycle, he enjoys watching documentaries, playing tennis, soccer, and spending time with his family.

Christian originally from Peru, proudly became a United States citizen on July 4, 2013, and was sworn in at the home of Thomas Jefferson, Monticello. Often touting that he was there during their 2010 Final Four run, he is a graduate of Virginia Commonwealth University